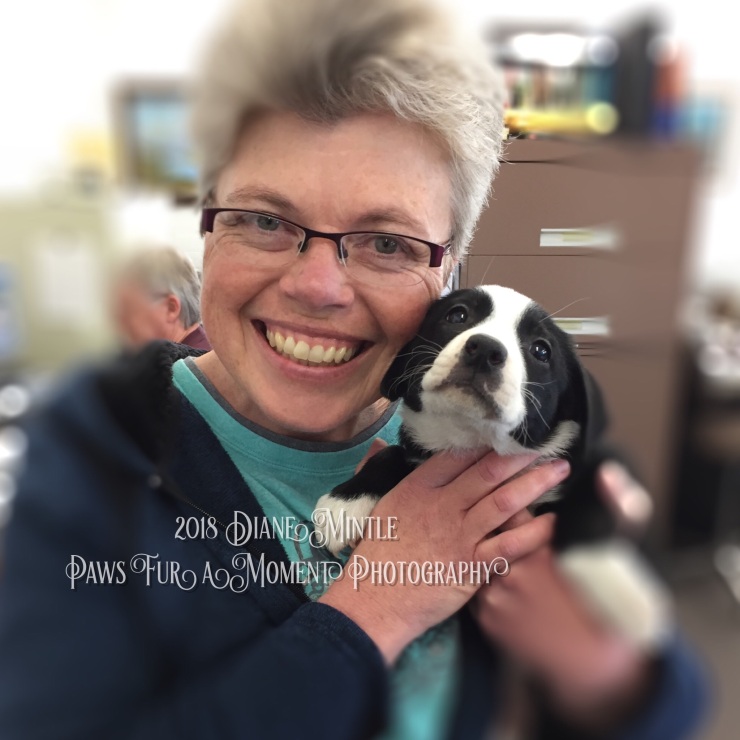 ~ Above: Me and Freddie at my office right after my husband adopted her. ~

Little Miss Freddie…a mix of border collie and black lab…came into our lives at the age of eight weeks on my 49th birthday in 2017. My husband called me at work and asked “What are you doing for lunch?” Since it was my birthday, I thought he was asking me out on a lunch date. Instead, he said “You want to go look at puppies?” Heck YEAH! Who DOESN’T want to go look at puppies!!?? Duh! Come to find out…my mother-in-law had called my husband earlier in the day and told him about “free” puppies she had seen advertised in the paper.

Having been without our two golden retrievers, Nugget and Comanche, for nearly four years, the topic of raising another dog had recently come up in conversation on occasion. My husband was more ready than I was…and it was discussed that he needed a K9 companion when working in remote areas during the summer months. Being retired, my husband would be spending the most time with the new pup and be the most involved in training. With that in mind, I told him I would be fine with which ever puppy he selected and to just go ahead and adopt one in the litter his mom told him about. He stopped by my office right after adopting her. She was adorable, of course. 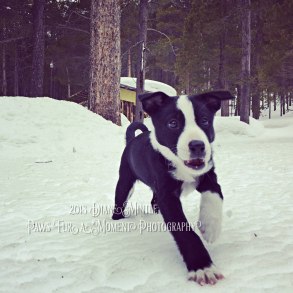 ~ Above: Freddie’s first time at the cabin on the mountain. ~

My husband had always wanted a dog named Freddie…so, that is how we ended up with a girl dog named Freddie. After a friend suggested it, I decided Freddie could be short for Fredericka and I like to give my mother-in-law a bad time by insisting that since the “free puppy” was her idea, Freddie’s middle name would be Kathryn…Little Miss Fredericka Kathryn.

Freddie immediately showed her intelligence and fit into our active lifestyle perfectly. We take her on hikes, she loves riding on the 4-wheeler, and being a very active breed, she goes on five or six-mile runs daily alongside the 4-wheeler usually with my husband.

She is a joy and is learning new things every day. She has been with us now for a year and every day is a new adventure.

~ Freddie sitting on the stump of a tree my husband had just cut down. ~ 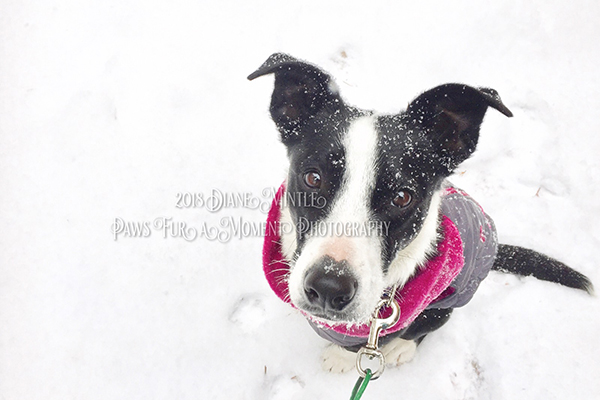 ~ In her new coat on Christmas Day at the Cabin.”

View all posts by Paws Fur a Moment Photography